“Values aren’t visible on a resume. They’re revealed in the choices we make: to speak up or stay silent, take responsibility or make excuses, and lift others or cut them down.”

We all want to be recognized for our achievements. Kitchen and bathroom remodeling firms are filled with talented, competitive people who aim to demonstrate their abilities to each prospect that walks through the door.

Since kitchen and bath firms usually comprise small, tightly woven groups, one team member can greatly influence everyone else, which can be good or bad for the team. That’s not to mention that those who excel at selling remodeling jobs, and those who lag in sales, are both very noticeable to their peers.

Every sales designer has the potential to generate high numbers for their firm, and studies have shown there is an excellent way to maximize the team’s contribution by hiring the right staff.

The purpose of giving

Adam Grant is a professor of psychology at Wharton Business School and the New York Times bestselling author of Give and Take. Grant asserts that people are either givers, matchers, or takers.

Most people are takers at face value. Everybody wants good things for themselves. People want to be known for their intelligence and achievements. So takers are those who seek to improve their station in life.

Matchers are those people who give, expecting something in return. It might result in a deal: “You do this for me, I’ll do that for you.”

Givers want to see other people succeed and feel good about their actions. They tend to be supportive but also as ambitious as the next person. There are two types of givers; those who give selflessly and those who give responsibly. Selfless givers may sacrifice what is best for them to get ahead so that someone else benefits more significantly from their actions. Responsible giving is when the giver is selective about where, when, and to whom they give.

The main takeaway of Give and Take is that responsible giving is a trait of the most efficient people. However, for giving team members to have an outstanding positive impact on productivity, givers need to be surrounded by other givers in an environment that fosters a giving culture.

Business culture in the United States equates being ambitious with taking what you want to achieve your goals. Business schools teach the virtues of being profit-minded over being community-minded. Indeed, the plans of any kitchen and bath dealer ought to include selling the greatest number of jobs possible per quarter.

Being a giver is not about allowing others to steal recognition that is their own or underperforming so their coworkers look better. Givers achieve the highest levels of productivity. Studies have shown that teams are at their most robust when they’re filled with givers because everyone on the team is working for themselves and the company’s greater good. 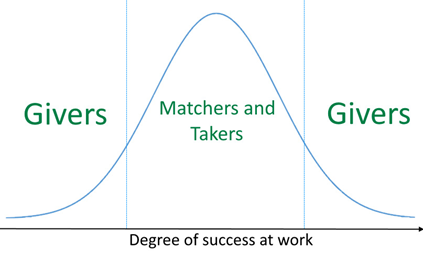 Grant’s research revealed that givers achieved the lowest success at work out of all three groups by a wide margin. He also discovered that takers rise quickly and then burn out quickly. Due to their quick burnout, takers tend to fall in the average range of efficacy along with matchers. What is surprising is that the most influential people in businesses across the board were, in fact, givers!

Givers achieved the least and the highest efficacy rates from company to company.

How to be an effective giver

Sometimes we would like to think of ourselves as givers, but we’re unsure in what capacity we should give. There are things we can do for others that facilitate a giving atmosphere without being too taxing on our own time and energy.

Create a culture where givers flourish

It’s normal human behavior for people to default to ‘taking’ behavior. Givers seek success just like everyone else, and they will hide their generous disposition if they believe giving will threaten their place in an organization. When culture defaults to benefit takers, givers conceal their nature. That’s why there may be more givers in your staff than there appears.

However, givers thrive and exhibit the highest productivity levels wherever giving culture is encouraged.

When interviewing candidates, look beyond their skillset and your initial impression of their character. Find out if they’re the type of person to lift others up or shut them down. How do they work in groups, independently, or under pressure? The negative impact of one taker in an organization is triple the positive impact a single giver can make.

With a giving atmosphere influencing your team, instead of a group of talented individuals all striving to be the best sales designer on your team – you’ll have a group of sales designers seeking to be a part of the best kitchen and bath remodeling firm.

We discuss sound management practices such as making the right hire and other business tactics at SEN University. Grow your business by signing up for one of our fantastic online education courses or attending one of our in-person schools.

Then catch up with us in Tucson for the Fall Conference!