Great Leaders Start With “WHY” to Inspire Others

“People don’t buy what you do, they buy why you do it.” —Simon Sinek

Do your prospects know what your firm believes in?

They already know what you do. There’s no mystery behind what a kitchen and bath showroom is or what kind of business a kitchen and bath owner does! People buy from emotion. We want to identify with other people, images, ideas, business, anything — through the way we feel. Your company can inspire others by letting everyone know what you believe in. When your core values resonate with people, they will turn prospects into buyers because they also believe what you believe!

On the one hand, leadership is earned by outranking other potential leaders. It does not account for one’s ability to lead but to negotiate their way into a position of leadership.

Sinek states that most people start on the outside of The Golden Circle with What. We think about What we do as identifying who we are and How we do it as our ability level. Everyone can say What they do, and most can say How they do it, but it’s much more difficult to talk about Why you do something. Your Why is the core reason that drives you in life.

Think about it. Why do you do what you do? Is your reason crystal clear?

To be a great leader, Simon Sinek says in Start with Why that we must work from our Why outward. That means we need to identify the Why that we live for. Once we define our Why and live in our Why, what we do becomes inspirational to others — and changes our lives.

When you start with Why, you’re letting the world know what you stand for. There’s something about being driven by a purpose that inspires others to be led by their purpose too.

“Transportation as reliable as running water, everywhere for everyone.”

Take a moment to consider your Why. You may already know your Why and can say what it is when asked. Or you may not quite know what your Why is. You might feel it but are unable to put it into words. Give it careful consideration. If you’re not sure what your Why is, you’re thinking about it now, and soon you’ll come up with the words to define it, so it’s as clear as day! 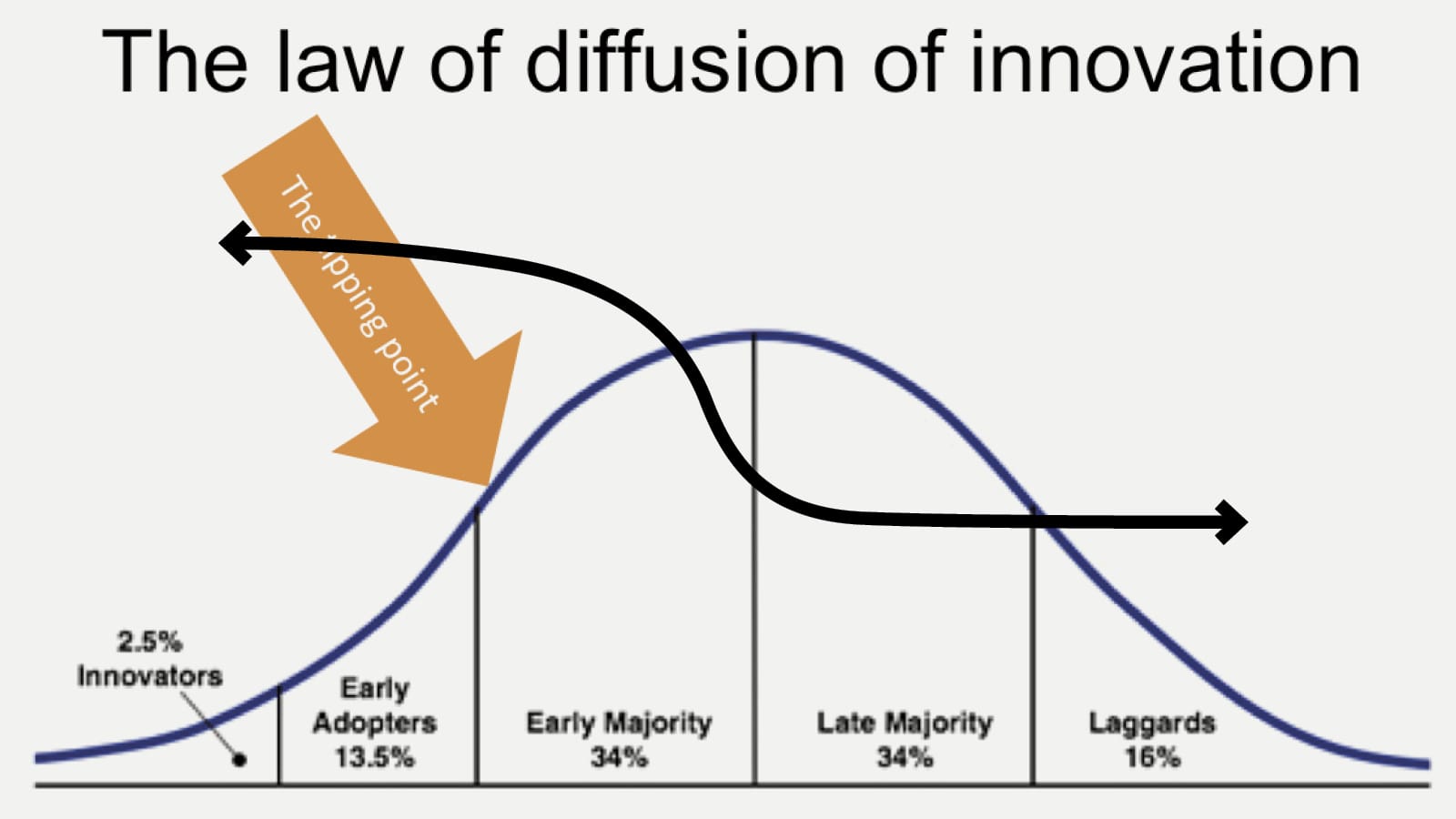 One thing about leading companies to market saturation is to pass through the law of diffusion of innovation.

In 1962 Everett Rogers coined the term “diffusion of innovations” to describe the five groups of a population who interact with technology. While innovators are inspired by new ideas and create new technologies, early adopters are the first to implement them. The early and late majority of a population carry the innovation from its market saturation tipping point into the status quo.

10% is the magic number for a few key business areas. Still, it’s not enough market saturation to get the word out on an innovation — or new idea — so that the lion’s share of the population accepts and adopts it into their lives. The conversion rate on new business happens between 15% and 18%.

In trying out a new idea, it is required to have a critical mass of followers to become the standard. When the tipping point has passed, you can be sure that such an idea will catch on like wildfire.

When Gordon Bethune became COO of Continental Airlines in 1994, he had the job of turning a bottom ranking, twice bankrupted company around. Employees were known to be grumpy to the customers and were resentful of their job. It’s fair to say that the company was disliked by its employees.

In his first year as COO, Bethune turned a $250 million profit for Continental, and the company saw its shares rise from $2 to over $50 apiece! He accomplished this impressive feat by focusing on the company’s employees. It was seen as heretical, but by focusing on its employees, Continental became a Fortune 500 Company and was consistently ranked in The Top Five Airlines by Forbes.

To build Continental into a lasting success, Bethune knew he had to rebuild from the bottom up through its employees.

Bethune offered his employees a deal: every month Continental made the Top Five for “on-time flights,” every employee received a check for $65. The money was given separately, not added to paychecks. Bethune had the bonus money sent in separate checks so that they could be seen for what they were: a symbol of success. He single-handedly created a company culture where all employees were geared towards the same goal.

Continental Airlines made the Fortune 500 list every year Bethune led the company! Under Bethune, Continental was twice named Airline of the Year by Air Transport World,” beginning in 2004 the “Most Admired Global Airline” five years in a row by Fortune, and continuously beat out other airlines to be named the first choice for customer satisfaction. Continental’s turnaround in the mid-1990s is one of the American business’s greatest success stories.

A company is a micro culture — in a sense, a group of people aboard a ship with a plan.

Great companies have a strong culture where their employees are united in shared beliefs and values.

For a company to function well, it’s essential to have the right people aboard the ship.

When Ernest Shackleton was looking for a crew of men to sail with him aboard the Endurance to Antarctica in 1914, he told them that the wages would be meager, they would be in constant danger, and the best that they could hope for — if they lived — was honor and recognition. Shackleton hired men who thrived on danger — and wanted to be paid in praise and recognition! He hired men with survivalist instincts — regardless of their experience or professionalism.

Every single man on board Endurance lived to tell the tale. That’s how Shackleton’s — and the crew of the Endurance’s spectacular failure — led to the eventual conquering of Antarctica.

Trust your Why and prove it in What you do

Sinek maintains that when you do what fits into your Why, and stop doing — and opt not to do — what does not fit into your Why — you’ll find that life is shaped by a single purpose driving you forward. You will feel different, people will see you differently, and your life will get easier. Do what fits your Why, don’t do what doesn’t fit your Why. Sinek credits this as being the key to making big decisions easier to make.

You earn trust by communicating and demonstrating that you share the same beliefs as others.

Value equals the transference of trust

When you engage the buyer with interactive selling, you’re bringing them into the pricing process so that they can see how the costs are incurred every step of the way — this builds trust, enthusiasm, and motivation. And this is how customers go from being merely customers to being lifelong clients. Interactive selling has been proven to work for decades.

What person spending thousands of dollars for something of value wouldn’t want to know where it’s all going?

Interactive selling inspires loyalty in the buyer. It’s WHY DesignAlign, with Good-Better-Best project budgeting as its core feature, is destined to be a game-changing technology platform in the kitchen/bath industry.

To find your Why, ask the people closest to you a simple question: “Why are we friends?”

Don’t ask your family; stick exclusively to asking your closest friends. It’s difficult to answer because the part of our brain that controls our feelings doesn’t control our language.

When they give up on trying to answer this question in a meaningful way, switch to What questions:

What is it about me that you like? What attracts you to me?

They’ll have a difficult time putting the words together beyond the clichés such as; “you’re funny,” “smart,” and “caring.” Play devil’s advocate to drive more answers out of them.

First, they’ll say things that describe friends, and then they’ll describe the closest of friends. After they’ve hemmed and hawed, they’ll be frustrated and eventually start talking about themselves! Listen to what they say.

Imagine the powerful words they say that change everything:

“I laugh whenever I’m with you,” “You always cheer me up.”

When their answer makes you freeze with goosebumps or tears — and puts a crystal clear message in your brain that gives you an emotional response — they have articulated your values. That’s when you know your Why! When you know your Why, you have penetrated past the point of influence into inspiration with that person. Try it with another and see what they say. When other people start naming your values off the top of their heads, you instinctually know you have your Why.

Inspire people. It will change your life for the better.