“Greatness is not primarily a function of circumstance. It’s first and foremost a matter of conscious choice, and of discipline.” —Jim Collins

The kitchen and bath industry is swamped with the task of finalizing its transition into the 21st-century. Throughout the years, we have needed to change to sustain our success, but the correct answer is not merely evolving. To be truly great, we need to deliver superior service to every client consistently. To deliver superior service, our staff needs to work smoothly, so our job is easier. Though having “easier work” doesn’t mean we should rest on our laurels.

When operations are going as smooth as they can, it’s time to push ourselves further than we’ve ever gone before — so that our firms go from being a good company — to being a great one.

What do we learn by studying the contrast between success and failure?

Jim Collins and his team spent five years researching 1,435 company’s performance over 40 years. Out of all of the companies they studied, only 11 were found good companies that achieved greatness for a sustained period of time. These 11 companies were all publicly traded, began at or below market average, and skyrocketed to three times above the market average for an era period of exceptional success.

Did they all do the same particular thing to catalyze their rise to greatness?

Collins and his team framed their research around the question; how did these 11 companies become great, and is it repeatable? They compared each of these 11 Good to Great (G to G) companies with similar standing companies that failed to outperform the market competition so spectacularly or performed brilliantly for a considerably shorter time.

Collins and his team named these disciplines:

The Hedgehog, First Who, Then What, and Level 5 Leadership

A culture of discipline encourages responsibility and disdains the notion of the obedient employee. It’s about fostering brilliance, not about well-trained employees working on the clock.

A culture of discipline bares the following in mind:

1. Discipline of Thought: The Hedgehog Concept

The hedgehog knows one big thing and does it brilliantly.

Imagine three confluent circles where each circle represents a key element derived from the answer to a specific question: 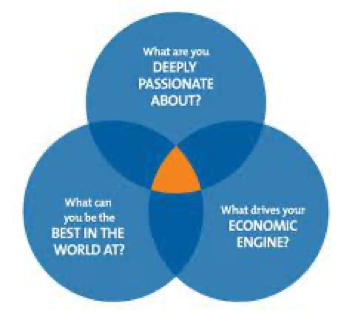 G to G companies have a simple strategy, a core concept, and a unifying vision formed from these three elements:

The center of these three circles is your hedgehog. The hedgehog combines all three elements, creating the domain a company should operate in to achieve its greatest possible success. Each one of the 11 G to G companies simplified their business around their hedgehog concept. They didn’t worry about any investment opportunities that lay outside of their hedgehog!

2. Discipline of People: First Who, Then What

Get the right people on board in the right seats. 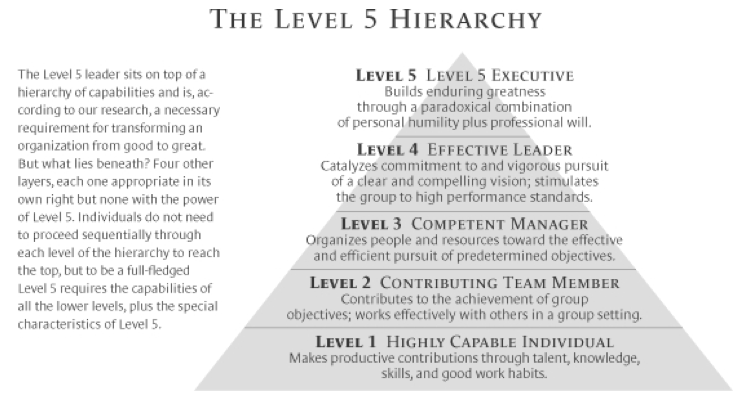 Your greatest asset is having the right people on your team. It’s been rumored that tech giant HP didn’t decide what kind of products they would develop until they had their team assembled!

Hire people who are capable of self-direction, management, and motivation. Collins’s research found that all 11 G to G companies desired and hired people of solid character who shared similar core values with the company and demonstrated leadership potential. The bottom line is that they are potential leaders themselves.

Collins discovered that G to G companies hired their staff, intending to train them to be exceptional leaders.

Bring the best people in, push the best products out.

A former Hewlett-Packard employee stated the company’s founders hired the best people for the job because they wanted to generate customers who were willing to pay more for their high-quality products.

After two months with new hires on board, executives would ask themselves questions about the new hires: Would we hire this person again? If this person left the company, would we be at a significant loss because of it?

New hires who passed this test had a G to G company loyal to them because they were the right fit for each other.

Six of the 11 G to G companies did not have a single layoff in over 30 years! Four of them had only one or two layoffs in just as many years.

All good leaders rise through three developmental levels: skilled workers, reliable team members, and organized managers. Those who have executive grade management skills rise to level four: a leader who might be thought of as a visionary with a broad spectrum of influence.

Rarely leadership goes even further – to Level 5. Humility and resolve are the two behavioral traits that all Level 5 leaders embody. These two characteristics may seem defiantly un-leader-like – even possessing the characteristics of followers, rather than the rarest of influential personalities until you consider that Abraham Lincoln and Dr. Martin Luther King, Jr. are famous figures of Level 5 leadership.

Level 5 leaders tie in the capability and strength of the other four levels of leadership and behave differently than other leaders – due to the humble character of their ambition. They are not driven for personal glory but seek to build something greater than themselves that is not about themselves. Walt Disney, Nelson Mandela, Mother Theresa, FDR – these are more examples of the caliber of leadership we are talking about.

A commonality between the leaders of G to G companies is adherence to what Collins and his team came to call The Stockdale Paradox. Stemming from interviews with Admiral James Stockdale, a seven-year political prisoner during the Vietnam War:

The Stockdale Paradox arises when we have an unbreakable belief that we will prevail in the end while having the discipline to confront the brutal facts of our current situation.

Build up and breakthrough

From the outside looking in, success can look like an overnight sensation. But in reality, Good to Great companies did not become great by some single defining action or brilliant revelation. They became great through discipline, repetition of step-by-step action, decision-making, and an unwavering belief that they would reach their goal.

A company’s most significant success will come from repetition, not innovation. With the right people on board handling the right roles, a cutting-edge streamlined selling platform in our sales service, and continuous education for leaders and their teams, you will see your biggest success yet.